The Golden Temple (or Sri Harminder Sahib) is the home of the Sikh peoples as well as a sublime place to visit. Founded by the late Guru Ram Das in 1577. The walls of this temple are made of real 24 karat gold! The Golden Temple is located in the Sikh state of Punjab in the city of Amritsar and is the holiest Gurdwara for the Sikh religion. Its located on a man-made lake which the Sikhs bathe in as well it has a bridge of where if you go on it’ll lead you to the primary prayer room. If you’re willing to see the golden temple you can book a ticket to Amritsar and see it for yourself and just like the Canadian Prime Minister, you’ll be stunned…

So, if your planning to visit the temple you’ll need to know more about it. Of course you should know the location, (India, Punjab, Amritsar) but how about some background history. Like previously mentioned, the Golden Temple is the most holy Gurdwara for the Sikh religion. This is because it is located in the home state of Amritsar also it was built by the Gurus as well its plated in gold. Also it’s constantly got people flooding in to finally see it themselves.

Built by Guru Ram Das and Destroyed by the Mughals, the history is also just as good. Ordered to be built in 1577, the Golden Temple. It was also an important pilgrimage to the Sikh Empire. As it was destroyed the maharaja demanded for its reconstruction and it was completed however this time in copper and marble, but it was then covered in gold wrapping. And as decades and even centuries had passed the Harminder Sahib was left completely untouched as it also left many people jaw-dropped seeing such a large Temple made of gold just being there!!

If you do manage to see the Gurdwara you must at least see it at night because it has ravishing lights placed on it, which lights up the Sarovar (a lake around the temple) absolutely excellently. Some more information about the golden temple is that inside the golden temple there is a Langar hall where Sikhs eat their daily foods. Also inside there is a prayer room where they can sit down and pray or contemplate the things they’ve done or will do. A Langar and Prayer room is regular in Gurdwaras however the one in the golden temple are a lot more special…

However the Langar isn’t inside the actual Temple you see, its located on one of the outside marble temple-like buildings. So therefore the prayer room is inside the Golden Temple. ALSO IMPORTANTLY to show respect you should wash your feet as well as take of your shoes additionally wear a Turban because a Sikhs do this as respect so you should also!

The traditional food of India has been commonly delightful for its fabulous use of herbs and spices. Indian cuisine is known for its large variety of dishes. The cooking style varies from region to region and is largely divided into South Indian & North Indian cuisine. India is quite famous for its diverse multi cuisine available in a large number of restaurants and hotel resorts, which is reminiscent of unity in diversity. The staple food in India includes wheat, rice and pulses with chana (Bengal Gram) being the most important one. To know more about the Indian traditional food, read on below….

Bengali cuisine is delightful for its fabulous use of panchphoron, a term used to refer to the five essential spices, namely mustard, fenugreek seed, cumin seed, aniseed, and black cumin seed. The specialty of Bengali food lies in the perfect blend of sweet and spicy flavours.

The traditional Gujarati food is primarily vegetarian and has a high nutritional value. The typical Gujarati thali consists of varied kinds of lip smacking dishes. Gujarati cuisine has so much to offer and each dish has an entirely different cooking style.

Kashmiri food that we have today in the restaurants has evolved over the years. Highly influenced by the traditional food of the Kashmiri pundits, it has now taken some of the features of the cooking style adopted in Central Asia, Persia and Afghanistan.

Mughlai cuisine is one of the most popular cuisines, whose origin can be traced back to the times of Mughal Empire. Mughlai cuisine consists of the dishes that were prepared in the kitchens of the royal Mughal Emperors. Indian cuisine is largely influenced by the cooking style practiced during the Mughal era.

The cuisine of Punjab has an enormous variety of mouth-watering vegetarian as well as non vegetarian dishes. The spice content ranges from minimal to pleasant to high. Punjabi food is usually relished by people of all communities. In Punjab, home cooking differs from the restaurant cooking style.

The cuisine of Rajasthan is primarily vegetarian and offers a fabulous variety of mouthwatering dishes. The spice content is quite high in comparison to other Indian cuisines, but the food is absolutely scrumptious. Rajasthanis use ghee for cooking most of the dishes. Rajasthani food is well known for its spicy curries and delicious sweets.

The cuisine of South India is known for its light, low calorie appetizing dishes. The traditional food of South India is mainly rice based. The cuisine is famous for its wonderful mixing of rice and lentils to prepare yummy lip smacking dosas, vadas, idlis and uttapams.

Lately, Indian cuisine has been gaining in popularity around the world because it has amazing flavours and taste.

Nanded, is one of the important centres of Sikh pilgrimage situated on the left bank of River Godavari, is a district town in Maharashtra (Western State in India) is a place of great historical and religious significance to Sikhism. It is also a major pilgrimage centre for the Sikhs worldwide.

Sikhism was founded by the saintly spiritual leader, Guru Nanak Dev Ji, in Punjab in the 16th century AD. The new religion combined several elements of Hinduism and Islam, seeking to inculcate peace between the two warring communities. Today the Sikhs are a dynamic and a progressive community found mainly in Punjab and north India, but spread out to almost every corner of the globe.

The Hazur Sahib Gurudwara (Sikh Temple) at Nanded is one of the five high seats of authority (takhts) of the Sikhs. It is also the second holiest place in Sikhism, next only to Harminder Sahib (Golden Temple) at Amritsar.

Some of the major national highways pass through Nanded city, facilitating road transport between Nanded and every major city in Maharashtra.

Besides its religious significance and rich history, Nanded is a beautiful city surrounded by hills and greenery. Located in the interior area of Maharashtra (Marathwada region), Nanded is the state’s eighth largest city and has now grown into a regional hub of education and health services.

Hazur Sahib Gurudwara – This holy temple of the Sikhs was built by Maharaja Ranjit Singh, who ruled Punjab from 1830 to 1839 AD. Guru Gobind Singh died at this place and his remains, along with some of his weapons, are preserved at Hazur Sahib.

Nanded Fort – It is located at a distance of 4 km from the Nanded Railway Station. It is a beautiful spot surrounded by Godavari River on three sides. A good garden and beautiful water works around the fort enhance its beauty. There is a famous temple dedicated to Lord Shiva near the fort. The area also abounds hot water springs with sulphur and phosphate contents having medicinal properties.

Khandar Fort – This historic fort, located at about 50 km north of Nanded, was built in the 10th century AD by a powerful Rashtrakuta king who patronized Jainism.

Siddeshwar Temple – The Siddheshwar temple near Nanded was built in the 13th century AD during the reign of the Chalukya empire. It is a marvellous temple dedicated Lord Shiva, built out of big stones with scriptures engraved on them.

The best time to visit Nanded would be winter, stretching from November to February, when the weather is pleasantly cool.

India is the second most populated country with a rich history with lots of religious and unique structures to visit, for example the Golden Temple or Taj Mahal as well as the beautiful state of Goa and Many more! Read on to see where we can take you… 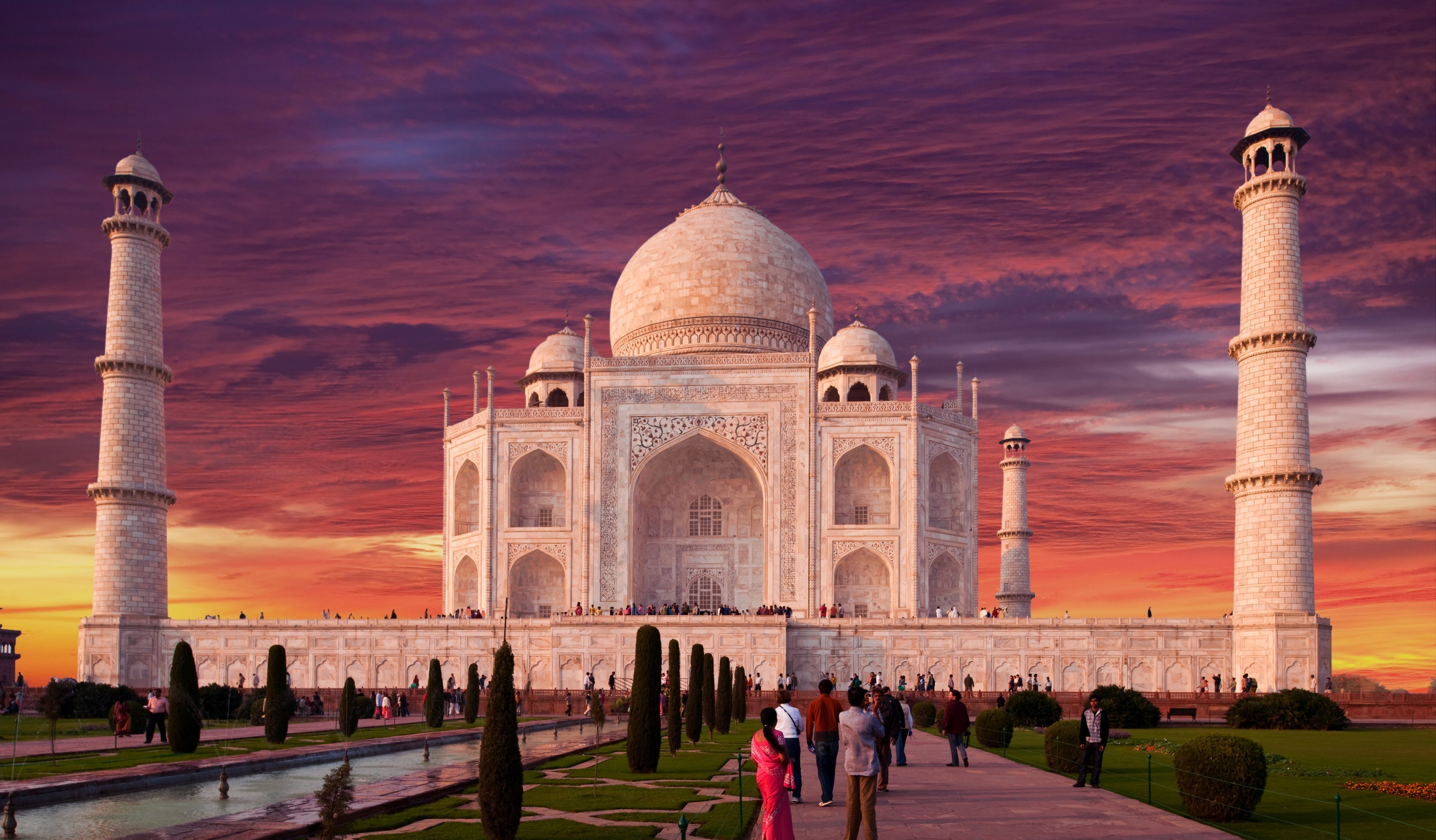 Built by the Mughal Empire, hundreds of years ago, the Taj Mahal is one the most popular tourist destinations in India its ivory white design stands out near the Yamuna River its certainly a lovely destination indeed.

The highlight of Amritsar, the home of the Sikhs, the Golden Temple certainly is one of the BEST places to visit. Built by Guru Ram Das at the holy city of Amritsar it has a man made bathing pool founded it and it’s made of pure gold…Once again an exquisite location.

Coming to these beaches is a once in a lifetime experience the sea, the beach, the trees, its crazy a place as beautiful like this exists!

The food alone is reason enough to travel to India — I sampled some of the most delicious food I have ever tasted during my travels there. Indians take their food very seriously and the cuisine, just like the country itself, is incredibly diverse.

In the North, you’ll taste lots of thick, creamy curries that are moderately spicy. My favourites include mutton rogan josh, parathas and tandoori chicken. The food in the north is heavily influenced by Persian and Mughlai styles of cooking. Southern Indian cuisine is commonly characterised by the use of ingredients such as coconut, seafood and rice and is spicier than food in the north. My favourite southern dishes were the masala dosas and fish coconut curries. Vegetarians are also well catered for in India, due to the large proportion of Hindus who are vegetarian.

The history and architecture

The holiest river in the world

Sign up for email offers - best holiday and flight deals straight in your inbox!